Bleeding Them Dry - Commentary on the CalPERS Long-Term Care Program

[Ed. note: The following commentary has been provided by Lawrence I. Grossman, who is a Certified Financial Planner, and CalPERS Long-Term Care Program Policyholder.]

The CalPERS long-term care insurance program is a zombie government entity. It is dead, as it is substantively insolvent, yet it persists to operate and destroy the lives of some 100,000 elderly policyholders. CalPERS’ refusal to recognize its failure has led to CalPERS’ extortion of these senior citizens to pretend to balance their books.

If CalPERS’ long-term care (LTC) program were a commercial insurance company, by now the courts and the California Department of Insurance would have declared it bankrupt and placed it into receivership.

In a decision issued in July 2020 that concluded the first phase of a class action lawsuit begun in 2013 - for the second time in two years - a judge of the Superior Court of California issued a ruling that CalPERS could not raise premiums on this group of LTC insurance policies that were issued decades ago.

Yet just four months after the latest Court decision, on November 17, 2020, CalPERS voted to raise rates again on those policies by another 90%. The figure below displays actual policy rates and the initial policy rate along with inflation and long-term care trends. 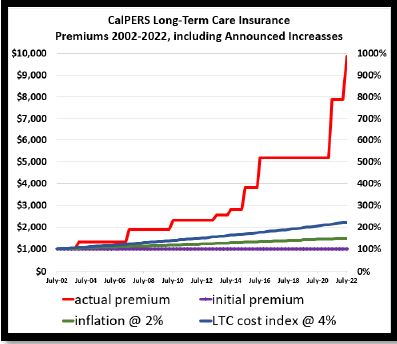 The class action lawsuit ruling impacts roughly 100,000 policyholders who are on average 75 years old, and who have already experienced rate increases of about 400% on policies which CalPERS marketed as having a “guaranteed” level premium and/or premiums which were “designed not to increase”. With the new scheduled rate increases, which CalPERS has carefully crafted to evade the legal limitations stated in the court rulings, 2022 premiums will be about 900% higher than and 10 times as large as the original premium.

To justify the rate increases, CalPERS explains that there is nothing wrong with the program, other than the usual issues that all LTC providers have faced. But that is a half-truth. While the same challenges have been faced by all other LTC providers, there is no evidence that any other insurer has responded with premium increases like those that CalPERS has imposed on its policy holders.

The Public Employees’ LTC Act of 1995 created the CalPERS LTC program with bizarre financial limitations – the program was shielded from oversight by the Department of Insurance and denied backing by state funded insurance guarantee associations. In addition, CalPERS and the State of California were also shielded from any financial responsibility for the program they created.

These massive risks to the financial stability of the CalPERS LTC program were never disclosed to policyholders. If CalPERS had properly disclosed these risks, far fewer policies would have been sold. These disclosure failures continue.

In the event of financial collapse, what would happen to the thousands of policyholders then in nursing homes or at home receiving benefits and to the over 100,000 policyholders who paid premiums for decades? Given CalPERS stance on the finances of the LTC program, it is likely that CalPERS would walk away leaving policyholders in nursing homes and the others holding the bag.

The CalPERS November 2020 meeting at which more premium increases were approved was truly dispiriting. There was no substantive discussion - no member mentioned the court decisions stating that such increases appear to violate policy contracts, or noted the failure to disclose material financial stability information, or asked staff why the CalPERS program has performed so terribly, or opposed the decision as abusive and unethical.

With the past premium increases along with the announced new increases, the CalPERS’ LTC program doubles premium prices every six years. While this sounds insane, to CalPERS it is just what is required to balance their not-for-profit books.

A redesign of the program in 2013 overhauled the LTC pricing and benefits; that resulted in new premium increases of 85% in 2015-2016.

Today, again, staff analysis contends that the CalPERS LTC program requires another redesign with 90% premium increases, but based on their history, it is clear that CalPERS cannot calculate reliably nor be relied upon any longer to run this program. It is impossible not to conclude that CalPERS has grossly mismanaged the long-term care insurance program and that it has raised premiums improperly, in light of court rulings, to cover up its shortcomings.

In 1995 the LTC program was set up for essentially all California public employees, retirees and family members. It quickly signed up 175,000 policyholders but the finances did not work as expected by CalPERS. Early reports to CalPERS of the financial problems were ignored. By 2013, premiums had been increased 200% and yet the CalPERS program was still in trouble.

At the current moment of crisis for about 100,000 policyholders, it must be recognized that legal recourse can only do so much and does so very slowly. The current scheduled premium increases of another 90% are not subject to the class action lawsuit. We have run out of time. The average policyholder is quite old, will die relatively soon and thousands will need their policy benefits in their final days.

To stop the extortion of these vulnerable senior citizens, CalPERS and the State of California need to take responsibility for fixing the callossal failure that they created. CalPERS long-term care insurance policyholders should not be responsible for the failure of CalPERS to operate a financially responsible government enterprise and to meet contractual agreements.

Executive and legislative branch action is immediately required to get CalPERS to halt the latest abusive rate increase and to put in place an impartial assessment – a forensic accounting - of the CalPERS’ LTC program to determine what has happened and the most reasonable way forward. This assessment needs to be transparent, independent of CalPERS and involve impartial third-party expertise.

But analysis is not enough. It appears most likely that new legislation is required to adequately bolster the CalPERS LTC fund and to avoid the continued extortion of policyholders. The original legislation is not a straitjacket. To get such new legislation, or any equally effective solution, there also must be a major push by employee and retiree groups that compels politicians to act fairly to defend California public employees, retirees and their families.

But the question is - Are there any leaders in California capable of protecting these 100,000 elderly policyholders from the injustice being perpetrated by CalPERS? To date, not one has stepped forward. It is time!

[Editor's ADDENDUM: Shortly after this article initially was posted we received word from our CSU-ERFSA Health Benefits Director that the CalPERS LTC Program is sending the following information to CalPERS LTC Program policyholders: ..... For your existing coverage, a rate increase of 52% will take effect no earlier than November 2021. However, in place of the increase, CalPERS will be offering the opportunity to change your long-term care benefit package. A letter explaining these options will be sent to you at least 60 days in advance of your rate increase.

If necessary, a second increase of up to 25% will take effect no earlier than fall 2022. If this second change is needed, you will have another opportunity to adjust your benefits. You will receive a letter explaining your options at least 60 days in advance of your rate increase. The letter will include the opportunity to further amend your long-term care benefit package in place of that rate increase. ..... [Editor's note: because the 25% increase for 2022 will be on top of the 52% increase for 2021, the net effect will be an overal increase of 90% over two years.]]

(Return to our Latest News Page)